The Small Window, The Story Of Hardluck's Beginnings

"Pa taught his family that God will not shut a door without opening a window. He said it was God's Way of leading His Children. And during hard times, Pa added that it was the North wind that made the Vikings. What he didn't tell Laurin, his 17 year-old daughter, was how small and difficult "getting through" that window might be or how long and strong that North wind might blow. It was 1848. Pa followed his dream; he was taking his family to the Promised Land, a land called California . Laurin, like her father, dreamed big until tragedy struck. When cholera claimed the lives of her parents and older brothers in the Humboldt Sink, she had to find that window and set her own sail against that staunch wind. She had to find a way not just to survive the trek over the Sierra and into California, but to survive once arrived. It wasn't just for herself but for her younger brother, age 7, and sister, age 4. They were her responsibility. Their futures, their very lives depended upon her. They couldn't go back; there was no "back" to go to. She loved them so she had to find a way." Autographed books available for $29.95.
Mining for Freedom

"Historian and lecturer Sylvia Alden Roberts helps dispel disparaging myths and offers substantive contradiction to long-standing stereotypes that limit characterization of the pre-Civil War Negro to only two categories: either the "happy" slave or the unfortunate victum. Instead, Roberts celebrates the memory and honors the dignity of the thousands of courageous, enterprising black men and women who were an essential, yet virtually invisible part of the California Gold Rush. Roberts shares photos and the stories of some of the men and women who defied strict fugitive slave laws and rose to meet other daunting challenges, finally revealing a spirit and truth long shrouded behind the shadowy curtains of time. Mired in fierce racial controversy but undaunted by the odds, black Argonauts united to form one of the wealthiest, most culturally advanced, and politically active commuinities in the nation." Available for $14.95
No comments:

OK, we have this great collection of Rock & Mineral Specimens just in. Been talking about to everyone we run into! Excited doesn't do the collection justice. You have to come in to see it to believe it. And we are not even in the rock business officially other than of course gold specimens... so this is pretty exciting to us.

For fun, one of our followers suggested we keep something special aside for our blog followers only. Great idea. Gives us a chance to see how many of you are actually following us as well as giving our followers a special thank you.

We have pulled aside several specimens that we will keep in the back room just for you. Just let us know you are one of our blog followers and we will pull the special stuff out. This offer is also being spread on our twitter account. All specimens are available on a first come, first serve basis and limited to stock on hand.

Some of these pieces are especially beautiful for possible jewelry making as well as collection pieces. The photos below are of some of the natural copper specimens. They sell for only $2.00 each and are beautifully intricate and lacy looking. One pair have already gone out for a pair of earrings. Lets see what you can do! 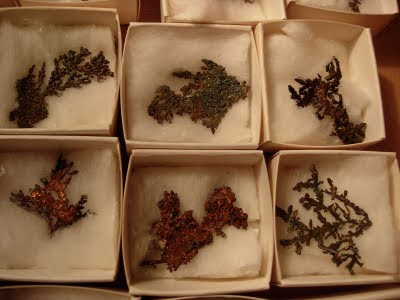 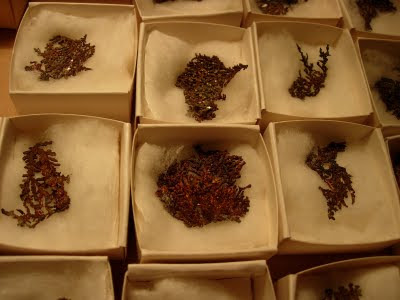 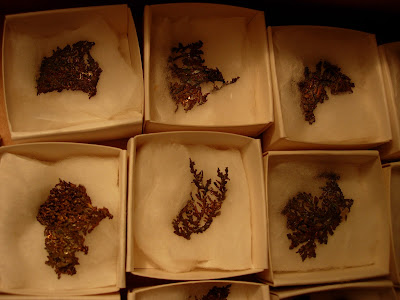 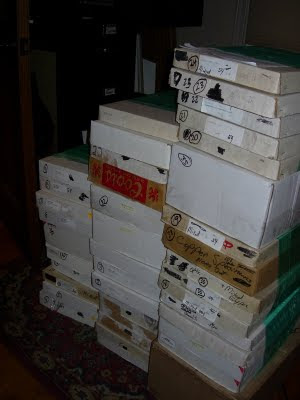 Just in! A fantastic collection of specimen rocks and minerals. We are still going through the boxes and discovering one treasure after another. It's like Christmas in here. OK, I said the "word" before our other sacred holiday, Thanksgiving, so that's a few dozen cookies I have to bake ... but, it really is! Check out the photo and the mountain of boxes.

These new specimens are going up for sale this weekend here in the Museum. With prices ranging from $1.00 to $250.00 there is bound to be a treasure for you novice collectors as well as our seasoned rock hound friends out there.
This process is taking longer than usual, but we are finding that each specimen requires extended ooo's and ahhhh's as well as delving into the "Encyclopedia of Rocks, Minerals and Gemstones" for much needed information and enlightenment.
Such beauty sends my mind wondering... I don't ever remember seeing such beautiful specimens when expected to learn about minerals in high school. If these had been presented as part of the learning process, I honestly believe it could have changed the direction of part of my life interests.
How lucky are the students here in Calaveras County! They have the wonderful Russ and Pam Shoemaker at the Stories in Stones Learning Center downtown Angels Camp. Here, students young and old can learn hands on about how the earth was formed and how these unique specimens fit into the science of Mother Earth.
On your next trip up to Ironstone Museum, stop by their shop and give yourself a treat or check out their website at http://www.storiesinstones.com/learning.htm.
Meanwhile, come in this weekend and check out the lovelies! While they last... here are a few photos of some of our favorites.... 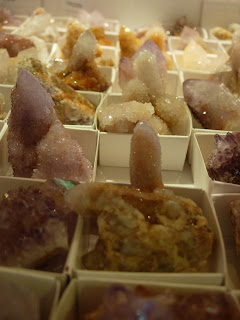 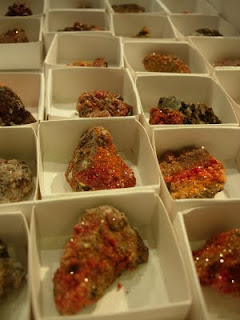 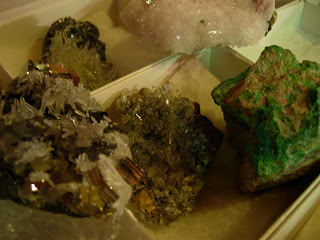 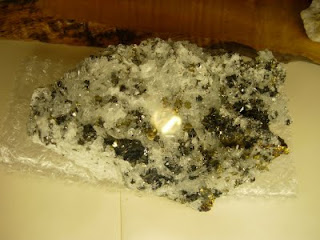 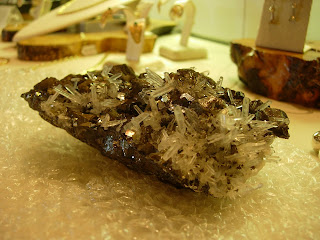