Come and Gone! Sorry you missed them...


This is one of most complete and up to date guides I have seen to date.
I even discovered information about our own area I hadn't realized before.
We do have the book in stock now if you don't want to wait till February 13th.
to read it!  Just bring it back in for the authors signatures.
Note: Dahlynn & Ken have also co authored several of the "Chicken Soup for the Soul" books.
No comments:

Ironstone's 13th Annual Spring Obsession Art Show, Competition & Sale is looking to be one of the best exhibits on record. Open Division entries are arriving daily from throughout the United States. Theme Division Accepted Originals are arriving this weekend. Excited is not a powerful enough term to describe how I feel! 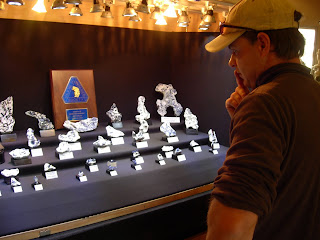 Collector Brett Keller works on his display of Benitoite for Ironstone's Heritage Museum.  Scheduled to be on display through March 7th., this collection of rare and unique Benitoite gems and crystalls is beautiful.  The rich blue hues found in these formations are breath taking.

Brett has won numerous awards with this display and has qualified for the National Show later this year.  He hopes to take home another prize for this beautiful collection.

Gem quality Benitoite is found in only one mine in the world approximately 20 miles north of Colinga, CA. in an area now called the Clear Creek Recreational Area.  It was first discovered here in 1907 by James Marshall Couch.  These first blue crystals were thought to be Sapphire or Spinel, but their softness, with a Mohs hardness of only 6.5 made them much too soft for either of those stones.  It was University of California at Berkeley Professor George Louderbach who first identified this gem as a new mineral and named it Benitoite due to its origin in the headwaters of the San Benito River.

Considered one of the ten rarest gemstones in the world, Benitoite is enormously popular among mineral collectors for its beauty and rarity.  With the mine now closed and mosted played out, this collection is even more rare and most certainly worth a visit to see for yourself.  Slide show coming soon.
No comments: