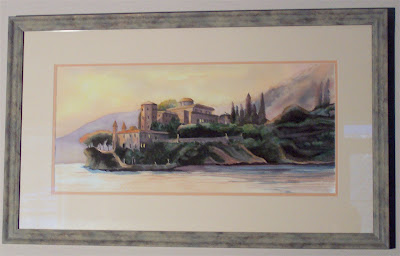 
J.D. Anderson earned a B.A. degree at San Jose State University in 1972, where he studied under professors Eric Oback and Richard Sorby, well know artists and teachers.  Anderson's interest in art was encouraged by his high school art teacher, Bob Nelson, who after a career as head of the art department at Monterey Peninsula College retired to Sonora and ran the senior citizen's program at Columbia College.


Anderson also holds an A.A. degree in Commercial Art from San Jose City College and was active with the San Jose Art League before moving to Sonora in 1976 where he joined the Mother Lode Art Association and the Central Sierra Arts Council.


He has participated in many art shows and won numerous awards for his work.  A number of his paintings and watercolors are owned by private collectors. He has also done some commissioned portraiture work and large murals.  Working in acrylics and watercolors, his preferred style is realism. 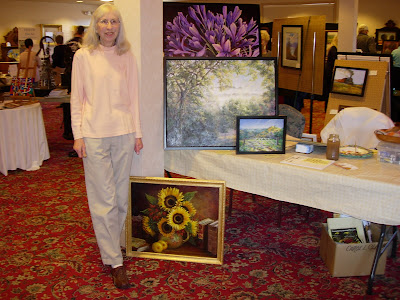 Carol Clark's favorite medium is oil paint. She paints a variety of subjects including local landscapes and historic buildings, large florals and still life of interesting objects. She enjoys painting light and shadows as they fall on objects. Her style is between realistic and impressionistic.


Carol currently displays her work once a year at Sonora Joe's in Sonora, CA. and at the Ironstone Vineyards Spring Obsession Show in Murphys, CA. In the past she taught art in Southern California, Utah and Pennsylvania. She completed her formal education at California State University at Long Beach and took informal lessions from Mary Ellen Christ in Birdsboro, PA. 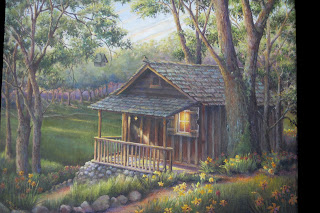 Today she lives in Valley Springs with her husband Roger and two cats. Her current work is sold as originals. These pieces are one of a kind not one of many copies! Any changes in  this policy will be made clear at the time of your purchase.
"The Miners Garden of Daffodils and Tulips"
Oil  24x30  $500
Carol Clark


Karen O'Neill has been painting and winning awards since her college days. Her challenge and her passion is to keep exploring new ways of expressing traditional subjects. Karen mainly paints in watercolors and fluid acrylics.  She often starts her paintings with a spontaneous abstract background on very wet paper or canvas. Then, after studying the diffused background from many angles, she starts to visualize areas that could become locations to place her subject - whether it be floral or landscape. She often likes her paintings to have a touch of abstract to them.  Recently she has concentrated on painting aspen trees in their full autumn colors and calla lily floral paintings.


Some of her many honors include being asked to paint the poster painting for the 2005 and 2007 Bear Valley Music Festival. Twice her paintings have been on the cover of the Harbinger magazine. In 2003 her painting "Symphony of Koi" was awarded first place in watercolors and was pictured on the cover of KVIE's "OnSix"  September program guide. In 2004 she again took a first place in watercolors from KVIE on her donated painting. These awards were give during KVIE"s live on aire art auction. One of her great joys was being one of the founding artists of the Iron Door Gallery in Murphys. In 2011 her painting "Grand Opening" was awarded Best of Show at the Arts of Bear Valley summer show.


Karen has exhibited in galleries locally as well as in Carmel and Taos. She was with the Harbinger Gallery for over 20 years. During the summer months her work is on display at Arts of Bear Valley's two summer shows. All Karen's paintings are professionally framed with archival materials. For more information on Karen and her work, log on to her website: karenoneillart.com.  Here you will find copies of many of her Giclee Fine art prints and some of her recent paintings.


Karen lives in Angels Camp with her Husband Michael. 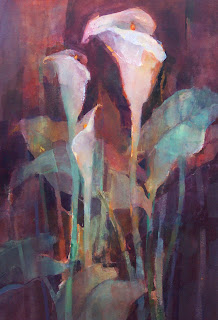 
Intuitive Painting describes Patricia's large watercolor pieces. The design come purely from her imagination as she watches the paints flow across a blank piece of paper. Several hours of thought and layers of watercolor take place until a pleasing image suddenly appears. This process is the challenge and freedom that Patricia has grown to love.


Huge flowers, big bursts of color or whimsical figures make for good conversation as she shows her work or places her art work in patron's homes. Everyone enjoys her use of bold contrasts of darks and lights and thoughtful composition.


Patricia resides in the picturesque mountain of Arnold, CA. the beauty of this Sierra setting attracts many artists and has become a learning center. Summer and fall found Patricia running workshops with major artists. She became president of Arts of Bear Valley for 3 years and also ran the summer show during that time.


Her works have been seen at the Town Hall Arts in Copperopolis, The Chartreuse Muse in Modesto, Bear Valley Summer Show, Bear Valley and Calaveras Big Trees State Park, Arnold as well as in Sunset Magazine. 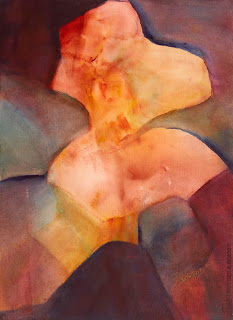 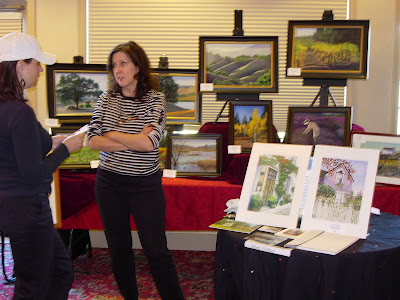 After living and studying abroad prior to her high school years, Marti Walker spent many years on the East Coast of the United States (Virginia & Boston). She attended University of Colorado where she majored in Languages & Anthropology. She flew for TWA and Pan Am Airlines for seven years after college. In 1978, she settled in Sacramento, California.
Initially, her pursuit of art was an antidote to the rigors of corporate life. Her passion for painting landscapes grew as she devoted her recreational time to exploring and painting the surrounding wetlands, rivers, and mountains, and traveling throughout the world.
Studying with carefully selected artists over the years, she has learned her craft from such notables as Gregory Kondos, Lady Jill Mueller, Ning Hou, Susan Sarback, Gary Pruner, Zoltan Svabo and Calvin Liang, among others.

“My art combines my passions for painting and travel. A holiday in Tuscany or a weekend trip to Sonoma County inspire me to capture the essence of a locale. I paint to record the sensation of a moment in time, to create in the viewer a palpable feeling of being transported experientially into the scene. The challenge is to translate the full power of the senses engaged onto a two-dimensional surface. Using vivid colors and contrast to push beyond the image, I attempt to evoke the vibrancy and immediacy that comes from being in that place and time. I endeavor to capture the serenity that being in nature gives me. Each scene is carefully chosen to evoke a silent rhythm designed to transport one to a place of quiet meditation. I want the viewer to have the reverential sense of being along in the scene and at peace with themselves. ” 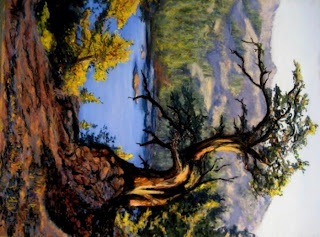 “Marti Walker is a listener. Her close observation of nature advances her capacity of doing paintings of great interest.” -- Gregory Kondos

Be the first to know as the schedule is finalized on our facebook page!
https://www.facebook.com/pages/Ironstone-Vineyards/76641156601
No comments: