Katherine Forst, b.1979, Oakland, CA, is a Monterey based artist who creates mixed media art based on the classical mosaic technique. She studied art history at Smith College with a passion for Italian Renaissance art. After graduation she moved to Italy where she lived for 10 years, absorbing the ancient and Renaissance aesthetic. While in Italy, she studied mosaic in Ravenna at the Centro per on Formazione Professionale (CFP), and the Accademia dele belle arti and apprenticed in Ravenna's top mosaic studio. She was certified by the CFP as a professional mosaicist. Her work has been shown in galleries around California.
No comments:

A member of Arts of Bear Valley since 2003 and a certified oil painting instructor, Sherrie's love of art began in early childhood. In 2000 she bacame interested in painting with oils after having painted for years with acrylics. Her inspiration was a magazine article that stated, "it's never too late to be what you might have been." That was inspiration enough to make a goal of finding out what it would be like to be "An Artist". With the encouragement of her family and friends, that inspiration has become a true reality. 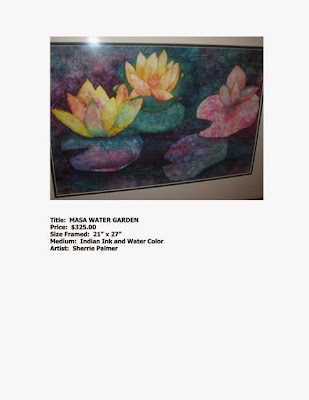 Sherrie has participated in art lasses in community college and workshops in Vallejo, CA, Portland, OR and Murphys. She and her husband moved to Arnold from Concord in 2003, after a 15 year desire to live in the Sierra Foothills. The family vacationed at Lake Alpine regularly, enjoying camping, fishing, and hiking. Sherrie says "the Sierra Mountains inspire the artist in everyone. The skies, sunset, windflowers, the stars so close at night; God's absolute beauty is everywhere you look."

Beginning in 2003, she has taught several floral & landscape classes in the Bay Area and Arnold. Sherrie has also exhibited at the following places, Bear Valley Summer Art Show, Calaveras Big Trees Show, Calaveras County Fair (numerous awards), Murphys Grill, Cottage Springs Resort, Snowflake Lodge, Pacific State Bank and Window Gallery in Arnold. Sherrie has served as President for Arts of Bear Valley in 2009, 2010 & 2011. She was Chairperson for the 2012-2013 Big Trees Park  Summer Art Show. Her desire is "to continue my pursuit of fine arts, expanding my talents to enhance my capabilities." She has continued to add watercolors to her palette by attending workshops by Jill Figler, Carolyn Macpherson, Jeannie Vodden; art classes of Martha Wallace, Murphys ; oil workshop with Judie Cain. Since 2012 Sherrie has been the Art Teacher at Christian Family Learning Center in Angels Camp, Ca. Sherrie feels that "art gives me the true joy and pleasure of reaching the artistic person inside of me." 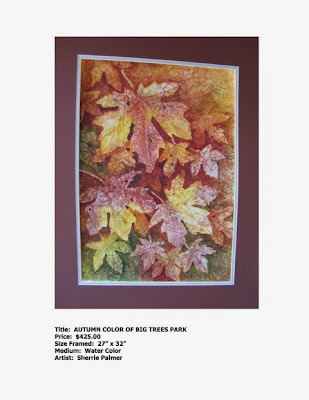 Sherrie's present preferene is oils, as they "have a deep rich color when incorporated together, you can experience an explosion of many colors, textures and even a translucent appearance." She delights in capturing this result with large floral, animals. Landscapes and many other artistic forms,

A native of Burlingame, CA, Judie studied at California College of Arts after high school. Family responsibilities behind her, in 1987 taking an early retirement from the business world, Cain returned to painting by attending college, numerous workshops and taking private lessons.

Judie has taught her oil painting fundamentals and color workshops in the western states as well as locally. She also paints in gouache.

~~ Her paintings and classes are at Copper Art Gallery, where she'll be teaching "Color Demystified" classes in May. Www.townhallarts.com. 209-785-2050.
This award winning artist has been represented in galleries in Washington, Oregon, New Mexico and California, including Murphys, Copperopolis and Carmel.

Ms. Cain has several works in print, Giclee and produced on home products and are collected worldwide.

Carol's favorite mediums are oils and waterolors. She enjoys bright and muted colors as well as the affects created by glazing layers of transport colors.

Carol enjoys landscapes, historial building and homes. This year she added figures to her themes.

Carol sells her art as originals and displays them at Ironstone Vineyards.

Welcome to my World of Creativity!

My paintings reflect my love of people in their surroundings. I love to capture the mood of my subjects. My choice of medium is pastel because of the brilliant colors, it's dry form and the immediate effect it has on paper.

I also like to portray the majesty of nature in my work since I grew up in Davis, Ca., an agricultural area, and spent much time in the Sierra Mountains on vacations. It was my father, an Entomology professor, who inspired me to have a deep appreciation for nature and a passion for art.  My people paintings are usually done from a photo back in my studio and I create my landscape paintings on location.

George has had an interest and a connection to art all his life but only in the last eighteen years has been able to dedicate his full tine to hits pursuit.

His teachers include nationally renowned landsape artist Charles White, watercolorists Penny Soto and Joan Dougherty, Judie Cain a frequent contributor to Artist Magazine and portraitist Gary Bergren. Ben Kikuyama, an internationally known feature artist at the Lahaina Galleries in Maui has been his mentor in the field of mix media and three-dimensional art.
George's style is most often surreal if modern and has been influenced by Picasso, Matisse and George's Braque as well as his first encounters with African Art and travel. His imagination and whimsy have all been inspiration to him and have encouraged his experimentation with color, themes and materials. His 3-dimensional Art is typically built from canvas or paper and them layered upon each other to form his interpretations of the subject. He takes a more conventional approach to more traditional themes.

George's art is typically both bold and colorful and challenges his viewers' sensibilities with sometimes humorous and sometimes penetrating looks at culture and it's surroundings . Further adding to his art are his pithy titles that often reflect both innuendo and a healthy splash of irony .

When asked what type of art he creates, Dillon respond, "It is hard to categorize , but I am known for color. I want each observer to have an emotional response of some type to my paintings. The vivid use of color causes a reaction as we tend to be internally stirred by the spectrum before us. I can describe what a painting means to me, but I hope the viewer comes up with a meaning that conjures up his or her own inner feelings ."

Dillon always starts a painting with the idea of where he wants to go but reflects that sometimes the creative process takes over and the finished product is something he never dreamed of. He gets a great feeling looking at a painting and having no idea how he did it but great satisfaction in the accomplishment. He offers a tip for viewers, "Often my titles help to discover what the art piece is trying to convey".  Many of his titles will challenge the observer to examine their own awareness.

Currently George is a member of the Calaveras County Arts Council, the Amador County Artists Association and the Lodi Council of Arts. His works have been on display in several  venues in the Bay Area, Sacramento and currently in the California foothills.
1 comment: