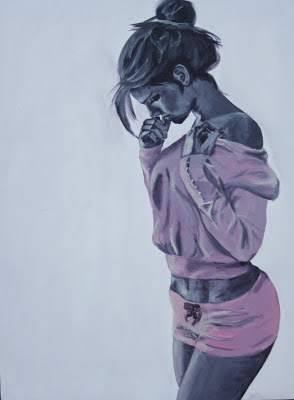 For 11 years, I was classically trained on the piano. In the 12th year, I switched over to jazz, the land of creative exploration...... But the 17 year old ego is a fragile one, and I couldn’t stand the eyes that stared at me while I fumbled through my 30 second solos. Never shy, but always a fierce perfectionist, the thought of being observed and judged while I hit the notes within the E flat scale instead of G minor was mortifying. At the ripe old age of 18 I quit the piano and moved on with “adulthood.”

Many moons later, I began to observe that my life was filled with the technicalities of life; working, paying bills, driving to the grocery store. I was missing something. Where was the creative exploration? Where was the use of tangible to express the intangible? In what ways was I pushing forward with a new skill that was simply enjoyable and not for career gain? How was I forcing my brain to think in the abstract, not just to type out business plans, but to simply express myself? How was I expressing the raw, primal emotions that were important to me, the ones I felt were important in life?

Two summers ago I fell into some painting classes. The details of how I found myself in the quaint, color explosion of a studio are irrelevant now. I have fallen so hopelessly in love with paint, I cannot believe there was a time it was not in my life. Both my grandmothers painted, yet it had never occurred to me that a paintbrush in my hands might be the most natural thing in the world. Not only had I found my expression through art, but my ego was finally capable of handling the mistakes that foster growth.

Painting is not an action for me, or an activity. Painting is a state. I often do not remember the thoughts I had in the midst of painting a certain piece. I do not remember certain strokes that were made. Strokes that I notice after the finish is on, strokes that I wonder might have been put there by some elf in the middle of the night. It is time in which my over-active mind ceases to race, and plan, and multi-task. The moments I spend with my brush are a solace, a sanctuary, a quiet place in which my mind is still, and something else takes over and calmly pushes emotions from somewhere within me onto the canvas.

Aubrey Straub lives in Folsom, CA with her husband, Sonny and their three kids, ages 7, 9, and 11.