Not your typical artist's backstory ….


Leslie spent her childhood outside Reno, Nevada, playing in boats, hiking, riding horses and camping with her family in the Sierra Mountains but art was not her thing. She comes from a long line of professional artists and musicians so she was surrounded by incredible art and people but she never had that gift. It was painfully obvious she was ‘not the talented one’ in her family.

So instead she embraced the outdoors and found she was great with animals. Her first jobs were as a ranch hand on a cuttin’ horse

ranch and an Arabian horse ranch working with foals, horses, dogs and cattle. She earned her college degree in English Lit and became a writer among other jobs before having children. 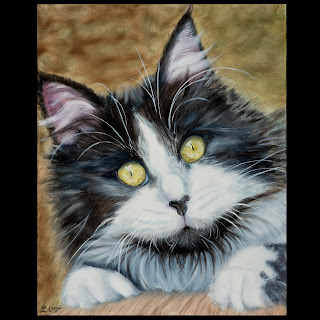 So it came as a total surprise to her when at age 43, she turned to art. So sure she wasn’t good at it and never would be, she wouldn’t even have considered it except she wanted her young children to have more art experience than school was providing. So she turned on PBS with the idea that while watching Bob Ross paint mountains and “happy trees,” she would learn enough to translate the concepts to her youngsters in a way they could enjoy.

"I'm from the PBS-school of fine art," she laughs without hesitation. But the moment she picked up a brush she felt overwhelmed with joy, hope and a powerful healing energy. She suddenly saw nature, animals … everything in a new way -- with the artist’s eye. Science made sense. The world opened up before her.


Within the first year she was talked into teaching art by the local recreation agency who had previously hired her to provide outdoor adventures to the public. The arts council soon heard of her and also hired her to teach art in the schools. Within the second year, she started winning awards, was urged to hang her artwork in shows (both juried and non) and her paintings started selling. Local theatres began having her paint their sets and backdrops. For a while she was in such demand as an artist that she was losing time with her family and lacked time to get outdoors. It became obvious Leslie had to start saying, “No” and learn to balance the demands on her time. There is still the occasional show, awards, and backdrop to paint, and she still goes into the schools as a visiting artist but she also carves out time to explore and paint en plein air.

She still teaches art in the schools for the Arts Council and PTA groups and is hired to give talks about art.


“Doing art is like trekking through the wilderness,” she says. “The struggle is rewarded with discovery not only of a pretty vista but of awe-inspiring, profound feelings … and the struggle is necessary. It’s what changes you. You can’t improve without it.”

Thanks, Looks good but I can't read the words ... they appear too dark on my screen. But the paintings sure stand out.

Thanks for the heads up. Did a copy/post from your submitted bio. Should have reviewed. Lettering should show up for you now. Let me know if you still have problems.