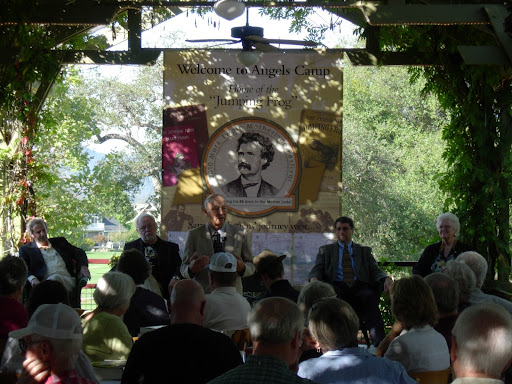 A most outstanding weekend... The 2010 Mark Twain's Motherlode Festival. Kicking off the event was the production of "Sam & Laura" by the Best Selling author, Ron Powers at the Bret Harte Theater Friday night.
I attended the Mark Twain Symposium Saturday morning at Camps at Greenhorn Creek.  MC'd by the Calaveras Enterprise's editor, Ralph Alldredge, this line up of Mark Twain scholars was eye opening. Listening to each as they described their journey of discovery of just who was this man, Mark Twain, it slowly dawned on me that I had never really focused or put into my own perspective just what a phenomenon Mark Twain truly is.  Irreverent, outspoken, fearless and willing to take on every social & political taboo of the times. Opinionated yet willing to challenge his own observations, Mark Twain is timeless, even today.

The sold out room laughed, sighed and applauded as each of the Twain Experts discussed the challenges they each faced as they worked through the endless manuscripts, letters and documents left by Mark Twain as attempts to piece together his own autobiography in exactly the manner Mark Twain intended.  A monumental challenge in and of itself.

On to the Gala Dinner, with keynote speaker Ron Powers, the Pulitzer Prize and Emmy Award winning author of "Mark Twain, a life" and co-author of "Flags of our Father", both New York Times Bestsellers.  Later in the evening, the very first presentation of the Mark Twain Award for contributions to the Journalism and literature of California by Will Fleet, President of the California Press Association to its first recipient, of course, Samuel Clemens. A grand night for all attendees.

Proceeds from this event will be used to benefit the Angels Camp Museum and to establish the Mark Twain Festival as an annual literary event for the entire Mother Lode region.  Caroline Schirato as executive director led the Steering Committee with chair Bob Trinchero on a path of outstanding execution down to the smallest detail. Kudos to all the sponsors, volunteers, committee members and others who assisted to produce this great event.

As I saw it, the focal point of this event was Mark Twain's Autobiography.  Mark Twain stipulated that his autobiography could not be published until 100 years after his death. And, here we are, 100 years later. I wonder if his statement meant Mark Twain did not realize the importance of his own contribution to American Writing. Did he perhaps not expect anyone would take up this challenge?  So here it is, 100 years after his death and Volumn one is on the table!

I have started reading this huge book. A treat to have access before the actual release date. True to Mark Twain, it doesn't follow chronological order as most biographys do, it is a series of stories in his own style, wandering from here to there, but, painting a beautiful picture of a man we have all grown to love.  I think I might even post some of my observations as I traverse his written word.  The book looks daunting, but, I love Mark Twain's animated style of writing and his keen observations. Humor, he makes me laugh. Mark Twain can look at an everyday event and see a totally different side than I would ever expect. He makes me laugh and he makes me sad. I will keep you posted on my progress.