We are so excited to present Vaughn Pottery recent arrivals.  June has outdone herself with a new line of stunning wearable art pieces.  So difficult to describe, so we have attached a little video for you to enjoy of her work.
No comments:


Decades of long haul truck driving through the deserts, forests, and mountains of the western United States does something to a person. In John Malley’s case, it made him want to paint.


“Whatever we do, we should try to give hope and understanding to someone else. That’s what I want to do with painting. Just give someone a chance to stop in their busy life and see the natural world. Even for just a minute, I want them to feel the beauty of God’s world and help them feel understood somehow.” - John Malley


John Malley is a husband, father and cookie-pushing grandfather who has spent his entire life in California. He grew up in 1950s Modjeska Canyon, on the western slope of the Santa Ana Mountains. After a childhood spent getting into mischief in the great outdoors, his career as a truck driver showed him the world through the large picture window of his truck's windshield.


Sweeping views of western landscapes became more intimate as the artist continued his outdoor childhood adventures by taking his wife and two daughters fishing, hiking, camping, snorkeling and dirt biking. Whether from the cab of his truck or the trails of his hikes, John Malley began to connect the colors around him to very specific emotions. In 2016 after he retired, his wife, Lynne Malley, suggested he attend painting classes in Lodi, California. Even though it was likely a bid to get him out of the house, it finally let the artist translate the emotions into color and form and try to reach out to others through his work.


The browns and oranges of his desert landscapes translate into comfort and soothing stability for the artist, while the greens and blues of forests and waters show how life keeps going, healing and progressing. The artist loves starting a blank canvas with a sketch and then layering on and amplifying emotion with color. He hopes his paintings help others feel more connected, understood and at peace.


Judy Morgan is an accomplished watercolor painter and has paintings in collections throughout the United States.  Born in Indiana, she grew up and was educated in Southern California and now lives in Calaveras County.  She was a longtime resident of San Diego County where she was an active member of the San Diego Watercolor Society.  Over the years, Judy was fortunate to have been able to study with many well known watercolorists such as Rex Brandt, Edgar Whitney, Gerald Brommer and Cheng Khee Chee.  She works mainly in transparent watercolor on paper or canvas but also sometimes incorporates collage, ink or acrylic in her paintings.  She finds watercolor fascinating and enjoys putting what she sees in nature onto paper.  She is equally adept painting on location or in her studio where she works from photos and sketches.  She has won many awards in the Calaveras County Fair and her paintings  can be seen at Art on Main in Murphys, CA, the Arts Council in San Andreas, CA and the two summer shows put on by The Arts of Bear Valley. 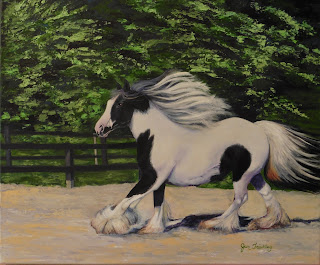 I began my fascination with art in Wiesbaden, Germany in 1989, where I learned a type of German folk art painting called Bauernmalerei. After five years in Germany, I returned to the U.S. with my husband and began to broaden my painting skills. We moved to ​Lake Tahoe, CA, where I was fortunate enough to befriend Lola Owen, my mentor and owner of Lakeside Gallery. While working with Lola Owen, I became more accomplished, and began painting in oils as well as most painting mediums such as water color, acrylic, and gouache . I began to get commissions for pet portraits and various other subjects which are wide in range. My husband and I now reside in Ione, California, at Lake Camanche, with a parrot and four cats. I have a very productive garden, am an orchid enthusiast, gourmet cook and paint whenever possible
No comments:


Yes, it’s never too late is a phrase that Effie firmly believes.


Effie’s life starts at a concentration camp in Rohwer, Arkansas.  She was born on January 29, 1944.  Japan had bombed Pearl Harbor and World War II was declared by the U.S.

The United States of America incarcerated every man, women, and child who were of Japanese ancestors on the west coast.  Effie’s first year of life was in a small single walled barracks that was very cold in the winter with snow and very hot and humid in the summer.

After the war had ended Effie’s family moved back to Lodi, California.  Her father farmed grapes before the war and lost everything.


He returned to start all over.  He was able to purchase 60 acres of grapes with the help of the entire family.  The vineyard is still in existence today.


Effie’s first art contest that Effie won was at Bruella Elementary School.  The teacher gave her first place from a drawing of Father Serra, who started a missionary in California.  The teacher showed the entire school the painting.  It was published on the front page of the school news paper.  This is when Effie decided to emphasize Art as a major in college.

Effie attended Sacramento State College and majored in art and education.  She taught secondary education in Sacramento for twenty-five years and the last fifth teen years she was a counselor in High school.  After retiring from education, raising a family, finally Effie started painting in watercolors.


Every Thursday she paints for Three hours in the same location where she attended high school called Hutchins Square.  With the help of art instructors Clare Oak, Jean Janssen, and Andrea Morris, Effie is given a chance to fulfill her desire to become a watercolor artist.


Recently, Effie took second place in the Lodi Grape Festival Art Show.  This was the won twice and she has ribbons from other local art shows.


Last year she was accepted to show in the Sand Hill Crane Art Show.  She was able to sell several paintings in the last several years.  One of her painting hangs at her church.


Yes, It is never too late.  She just became seventy-four years old and finally in the Ironstone Spring Art Show.


Angela Harmon is a 1999 transplant from the Bay Area.  She and her husband Don have been transforming their property on historic Main Street in Douglas Flat including an art studio with origins from an 1850’s cabin, orchard trees and gardens of inspiration and joy.  Angela’s art studio was the original home on the property.

Recently retired, Angela is now enjoying a renewed avocation in floral art designs.  Drawing upon her experience and design concepts from competitive flower show arrangements and flower creations for weddings, Angela is creating floral arts in oil, watercolor and mixed collage mediums.  She also creates dried floral wreaths, which she has done for over 15 years, utilizing flowers and ornamental herbs she grows in her garden.  She has exhibited her paintings at the Ironstone Spring Obsession show and gallery shows of the Calaveras County Arts Council.  She is a member of the Arts Council and has participated in their open studio tours.


Although primarily self-taught and continually learning from published artists via books and DVD tutorials, Angela has been fortunate to learn fundamental design and value techniques from local fine artist Judie Cain.  Participating in oil painting workshops given by renowned artist Janette Jones, Angela was encouraged to pursue her passion for flowers in new creative artistic mediums.  Her abundant floral gardens are a continual source of inspiration in creating designs of bright color and detail.
No comments:


Andrea Morris was born in Karlsrhue Germany and spent much of her younger years in Montana and Arizona.  She was exposed to art from an early age as her Mother was an artist and taught painting classes in their home.
She developed a love of wildlife and people and spent much of her time drawing and using pen and ink to capture her subject. It was not until the 1970’s that she started to explore working with color in watercolor.  Working in a local watercolor gallery in Tucson, Arizona she learned about building up her paintings through layers of transparent color.

She experimented in working in oils and acrylics and immediately fell in love with the mediums and has worked almost exclusively in these two.  A new passion for mixed media has begun to be represented in her recent works.
Her main focus of subject still remains wildlife and people and she has been working towards representing her subjects in a colorful and expressive style.
Being self taught she has learned most about her art by painting, experimenting and studying other works of art.  She has made a living painting, teaching and competing in art shows and has garnered many awards including best of show.
She presently resides in Lodi California and teaches classes in her small studio. She continues to paint and show her work in the surrounding areas art venues.
You can view a gallery of her art at https://www.dailypaintworks.com/Artists/andrea-morris-7103

Vickie has lived all of her adult life in Calaveras County in the mid northern Sierra's and Foothills. She has a BA in Business Administration and has been studying art for the last nineteen years. Vickie is a juried member of OPA, Oil Painters of America, CAC, California Art Club, Calaveras Arts Council and Arts of Bear Valley. She has won many awards in professional art shows and she works continuously to broaden her painting knowledge by attending master workshops and seeking inspiration from her favorite mentors. She additionally has pursued art course work through local colleges.


Vickie’s oil painting shown here at Ironstone were completed in studio and although she completes many of her works in Plein Air. She accepts commissioned work in studio and murals, contact her today at 209-743-4126.
No comments: